The University of Cincinnati commit and his Pilots classmates have come a long way since then. They’ve grown by leaps and bounds.

Drogosh & Co. walked out of Ford Field on Friday with a second-straight Division 2 championship after a 52-13 defeat of Grand Rapids Forest Hills Central.

“I know a bunch of us walked off the field saying, ‘We don’t ever want to feel like this again,’” Drogosh said of the 25-19 Finals loss to Mona Shores in 2020, “and now we’ve gone back-to-back years going off as winners. I think mental preparation is a big part of it.”

De La Salle (13-1) captured its fifth Finals championship overall, and also fifth over the last nine years – the Pilots also seized titles in 2014, 2017, 2018 and 2021. In March, De La Salle claimed the Division 1 boys basketball championship to make it three big trophies in two major sports over a 13-month span. Drogosh was among the football players also on the basketball team.

He exhibited major growth from his sophomore to senior seasons on the big stage of Ford Field.

On Friday against Forest Hills Central, the 6-foot-4, 215-pound dual-threat QB was nearly flawless in the passing game. He completed 21 of 23 passes for 249 yards and two TDs with no interceptions. He was nearly unstoppable on the ground, too, piling up a game-high 152 yards and three scores on 15 carries. 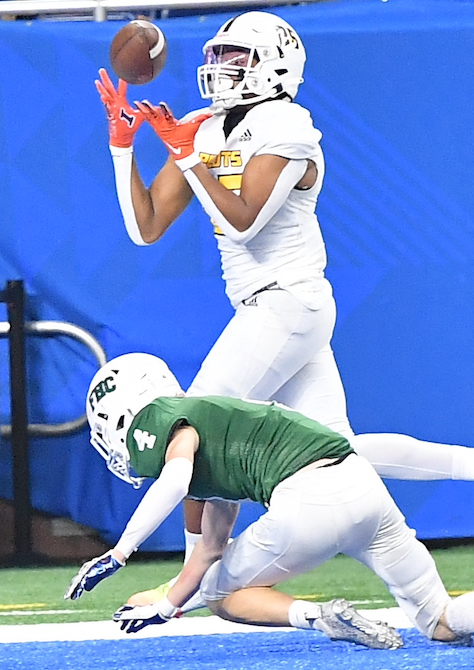 Forest Hills Central (13-1) was making its first Football Finals appearance since 1994, when the Rangers lost 17-13 to Farmington Hills Harrison in the Class A title game at the Pontiac Silverdome.

“I coach the defense, and we just couldn’t slow down the quarterback,” Rangers coach Tim Rogers said about Drogosh. “Why he’s not recruited by Alabama, I don’t know. He’s a darn good quarterback. He can make all the throws, he runs really well, he obviously checks a lot of things at the line of scrimmage. Man, he’s an excellent football player.”

As Rogers and his team found on film study and then even more so in person, De La Salle’s very large roster boasts several excellent players.

One of them, senior wideout Triston Nichols, played on a torn ACL and scored on a 9-yard pass from Drogosh to give the Pilots a 35-0 lead near the midway point of the second quarter.

De La Salle scored barely two minutes into the game on a Drogosh 3-yard run. The Pilots led 21-0 after one quarter and 38-13 at halftime. They put up two more TDs in the third quarter to go up 52-13 and start the running clock.

The majority of Drogosh’s numbers were accumulated during the first half.

The prolific point total was nothing new to De La Salle, which shattered its program’s single-season scoring record with 614 points. That eclipsed the 562 points amassed by last year’s team. The Pilots threatened the MHSAA Finals record of 56 points, but a drive to the Rangers’ 1 by the reserves was snuffed out by a high shotgun snap.

“Coming in with this group three years ago, I asked a lot out of them and they stood up tall and they accepted every challenge we gave them,” said Dan Rohn, who took over as De La Salle’s head coach in 2020 when Drogosh and his fellow seniors were much less experienced.

“They might walk out of De La Salle, which has had some tremendous football teams and tremendous groups, as maybe the most decorated and successful class of football players. I know I couldn’t be more proud to be part of that.”

De La Salle senior defensive end Mason Muragin, who is committed to the University of Illinois, knew what to expect when Rohn took over at De La Salle. 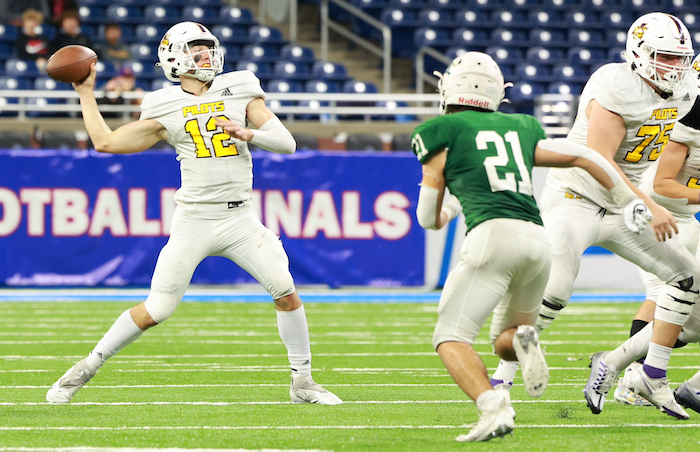 For Forest Hills Central, senior Justin Osterhouse completed 4 of 14 passes for 84 yards with two TDs and one interception. He connected with juniors Roman Brummel and Ty Hudkins for second-quarter scoring tosses.

“We got outplayed in all facets of the game. That’s a really good football team. We looked long and hard to find weaknesses on De La Salle’s team – we couldn’t find it on film,” Rogers said.

Forest Hills Central played a number of close games this season, most recently a 20-17 double-overtime victory over Dexter in a snowy Semifinal.

The conditions were much different inside Ford Field, but De La Salle proved too much for the Rangers.

“A lot of people doubted us and before the year no one really knew what to expect because we graduated a lot of seniors (30 from the 2021 team), but this is the toughest team I’ve ever played on and the most courageous guys and it just means a lot to get here,” said Hudkins, who paced the Rangers defensively with a game-high 12 tackles and a fumble recovery.

The Pilots learned from that defeat, just like Drogosh and his teammates grew from the disappointing Finals loss two years ago.

“Me and one of the other captains, Dante Pancotto, who’s an offensive lineman, we watched the sophomore state championship game on YouTube and it really just shows the growth of how (far) we’ve come in three years,” Drogosh said.

“I think it’s all about the mental preparation. I think we were mentally challenged our sophomore year with COVID and everything, and I think we bounced back a lot our junior year and got even better this year.”