This month’s blog is dedicated to the bravery and fortitude of Dr. Martin Luther King Jr. and all the participants of the civil rights movement. His work for justice and equality is unmatched and his dream still inspires today. Dr. Martin Luther King Jr. inspired the human race to strive for harmony among all people. His tragic death on April 4, 1968, shocked the nation, but his words and his dedication to equality shall continue to inspire younger generations. The work of Dr. Martin Luther King Jr. lives on today in the hearts and minds of every person who believes in justice and love and those who choose peace and equality for all people. Dr. Martin Luther King Jr. inspired the human race to strive for racial harmony among all people.  I often hear people say they are “colorblind” or ‘they don’t see color’. For me, this is a fictional statement. As human beings, we are visual people, it is who we are. I am a very proud black woman and when you see ME or I enter a room it is the first thing you see, but, it is not all that I am. As people, we don’t need to be colorblind. Yes, we need to see our commonalities, but we need to see and respect our differences.

We can never erase our country’s troubled past and we must never forget it. To not see color is to not see ME or the contributions that my people, Black people, like Dr. Martin Luther King Jr. have made to and in this country. Instead, I say see us as your equals, and let’s build bridges across our differences.

That is what is so beautiful about diversity, equity, and inclusion. A singular perspective will only give you a singular outcome. Diversity brings about a multiplicity in perspective. A diverse perspective provides a better chance for change. Change is not always easy, or comfortable, but it is necessary and always brings about a new and better outcome.  Together united we are smarter and we are stronger and that is a GREAT thing!In the words of Dr. Martin Luther King Jr.

Thank you for taking this DEI walk with me. United together, we are stronger. Stay safe and healthy.

Director of Diversity and Inclusion

Live Jesus in our hearts, Forever

“ The Brotherhood of man transcends all races, religions, political, social, and economic differences.”

Dr. Martin Luther King Jr. was a very extraordinary man  He believed in the philosophy of peace and nonviolence.

“Nonviolence is a powerful and just weapon. which cuts without wounding and ennobles the man who wields it. It is a sword that heals.” – Martin Luther King Jr.

He believed in the power of education,

He believed in the act of service. 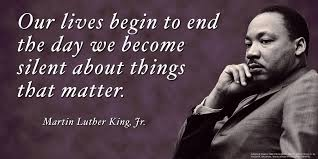 Was a stop on Dr. Martin Luther King Jr.’s national tour for civil rights. It was organized by The Detroit Council for Human Rights or DCHR. The march is known locally in Detroit, as King’s Walk on Woodward and The Great March. It had a crowd estimated from 125,000 to 250,000 people,  "the largest civil rights demonstration in the nation's history." The march was on Sunday, June 23, 1963, at about 3 pm, on Woodward Avenue and Adelaide, it continued on Woodward, and then onto Jefferson and concluded at Cobo Arena and Hall. The whole march lasted about an hour and a half, but afterward, there were speeches given.

Address at the Freedom Rally in Cobo Hall

The Living Room: Beyond the dream, 50 years later